LOUISVILLE, Ky. (Jan. 25, 2016) – The decline in the costs of food continued its year-long pattern as the average price of retail food items across the Commonwealth decreased as indicated by the most recent Kentucky Farm Bureau (KFB) Federation’s Marketbasket Survey.

This latest decline marks the fourth quarter in a row where retail food prices have fallen in Kentucky. 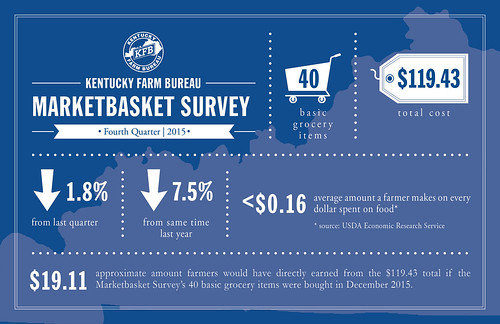 The continued drop in food prices across the state is in contrast to last year’s increases that were indicated in all four of the KFB Marketbasket Surveys. The final quarter of 2014 showed the average price of surveyed items to be $129.14.

While economists are slow to credit lower food prices with lower commodity prices, KFB Commodity Division Director Joe Cain said it is conceivable to think the two are connected.

“Just as we have seen the decline in oil prices bring prices down at the gas pump, at some point lower commodity prices should show up in the grocery store,” he said. “That’s good news for consumers but unfortunately that means our farmers are seeing lower revenues.”

From a national perspective, the latest Consumer Price Index (CPI) noted, for December 2015, the food index fell 0.2 percent as the index for food at home decreased 0.5 percent, led by a sharp decline in the index for meats, poultry, fish, and eggs. This marks the largest decline since March 2015. According to information from the Bureau of Labor Statistics (BLS), five of the six major grocery store food group indexes declined in December.

The index for food at home fell in 2015 with a drop of 0.4 percent marking only the third time it has declined in the past 50 years, noted the BLS.

The USDA Economic Research Service (ERS) predicts food-at-home (supermarket) prices to rise 2.0 to 3.0 percent—a rate of inflation that remains in line with the historical average, notes the agency. This prediction however, comes with a caveat; that being the outlook is based on normal weather conditions. With the presence of one of the strongest El Niños in several years, normal weather conditions may not be the case for several areas of the country in the coming months.

In KFB’s fourth quarter Marketbasket Survey, price decreases were denoted in three of the six surveyed categories which include beef, pork and dairy, while slight increases occurred in the poultry, grains, and fruits and vegetables categories. The most notable decrease came from pork which experienced an eight percent decline followed by dairy with a 5.8 percent drop. The price of ham dropped an average of $.82 per pound during the fourth quarter while cheddar cheese declined $.73 in price for a one pound package. T-bone steaks also dropped by an average of $.69 per pound during the same period.

The most prominent increases came in the grains category which saw a rise of 4.2 percent followed by poultry with a 3.4 percent increase. Chicken breast rose by $.21 per pound, while whole milk jumped $.06 per gallon.

Whether or not U.S. grocery prices fluctuate from one quarterly survey to the next, Kentuckians and all Americans continue to enjoy some of the lowest food prices in the world. Shoppers in the U.S. spend only about 10 percent of their disposable income on food each year. Those costs remain far lower than any other country in the world thanks to many of the agricultural efficiencies utilized in America. Today the average U.S. farmer produces enough food and fiber to provide for about 154 people – a significant jump from an average of 19 people per farmer back in 1940.

Yet while more food is now being produced on less land, the farmer’s share of the retail food dollar in America is down. According to the USDA’s Food Dollar Series, a farmer earns less than 16 cents per dollar spent on food, down significantly from the 31 cents earned in 1980.